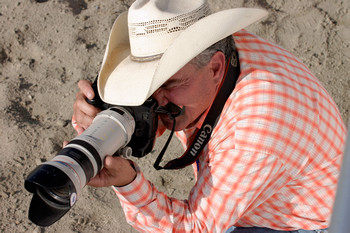 Born and raised in sunny southern California, Richard, as a young boy, looked forward to the family excursions up the coast to the Big Sur area. These childhood trips via the El Camino Real sparked his interest in California's ranch history: the open ranch land with rolling hills, cattle, horses, and the occasional glimpse of a real "cowboy." Yes, the road north was sprinkled with ranches like The Santa Margarita, Hollister Ranch, Hearst Ranch, Old Castro Ranch, and El Sur to name a few.
Then at age seven Richard tried out his first camera. Many years and thousands of pictures later, he is a professional photographer and Richard finds himself photographing some of those very same ranches he viewed from his parents' car window.
He feels especially honored to be an official photographer for the historical Hearst Ranch in San Simeon, California, chronicling their ranch operations consistently the past few years. In 1995 he was made official photographer for the Professional Rodeo Cowboys Association (PRCA). His photos are consistently requested for use by news media and national publications.
With cameras in hand, Richard captures history in the making. In the dust of the corrals and rodeo arenas capturing close-up action shots, covering special events with portraits, or documenting behind the scenes production, he approaches assignments with enthusiasm, always eager to please clients. Richard and his wife Sandra often work as a team on location shoots. His photographs have served as reference for paintings by cowboy artists. Richard's photos have appeared on countless programs and magazines, and have been published in the book "True Horsemanship Through Feel" by the late Bill Dorrance.
© Richard Field Levine Photography
Powered by ZENFOLIO User Agreement
Cancel
Continue